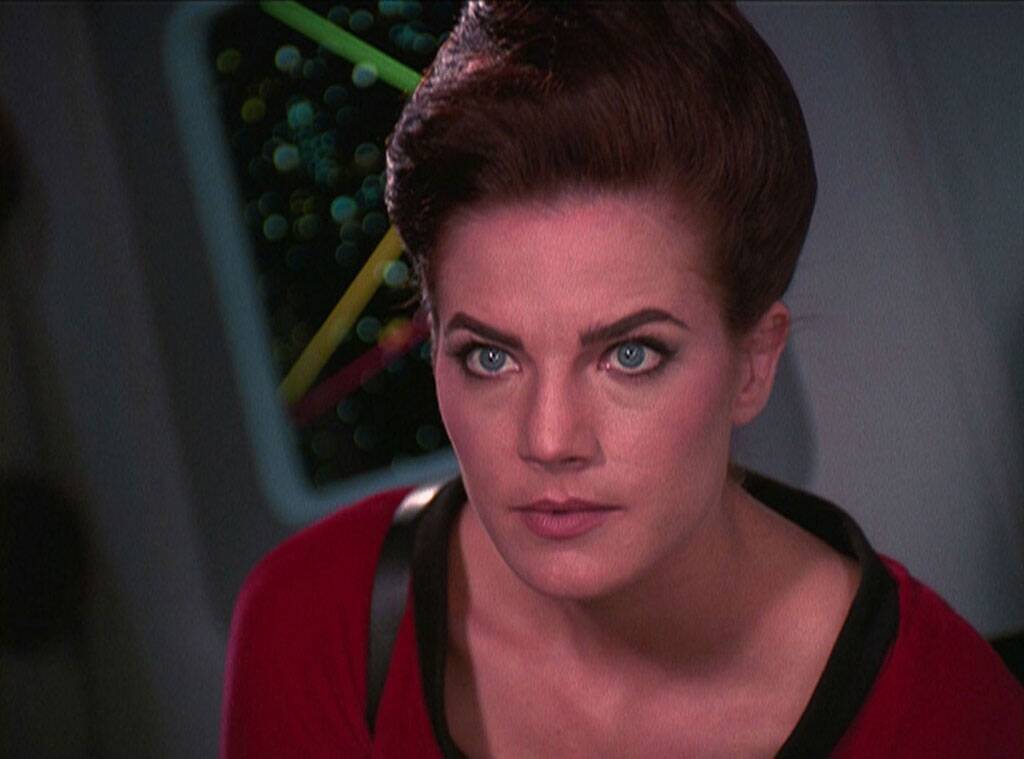 Terry Farrell brought to life the character of Jadzia Dax, a member of one the more interesting alien species from the Star Trek universe, the symbiont Trill.  Over the course of six seasons on Star Trek: Deep Space Nine, Terry brought a mix of seriousness, humor and friendly playfulness in her relationships with the characters of Commander Sisko and Dr. Bashir, among others.

Terry was born in the same state that was eventually christened as Captain Kirk’s fictional birthplace, Iowa.  Already almost six feet tall in high school, she modeled for 18 months before turning to acting, appearing in the motion picture comedy Back to School, and then stints on television such as Quantum Leap and The Cosby Show.

In the early 1990s, she joined the cast of Star Trek: Deep Space Nine. Her character was the focus of many popular episodes, allowing Terry to showcase her talents over several years.  After DS9, Terry joined the cast of Becker, starring alongside Ted Danson for four seasons.

As for the public side of her personal life, many Star Trek fans will know that Terry married Leonard Nimoy’s son Adam Nimoy just last year! This is Terry’s first visit to Trekonderoga – don’t miss the opportunity to meet Dax herself in the corridors of the Starship Enterprise, as she once roamed, in character as Dax, in probably the most popular episode of DS9, “Trials and Tribble-ations”, pictured here! 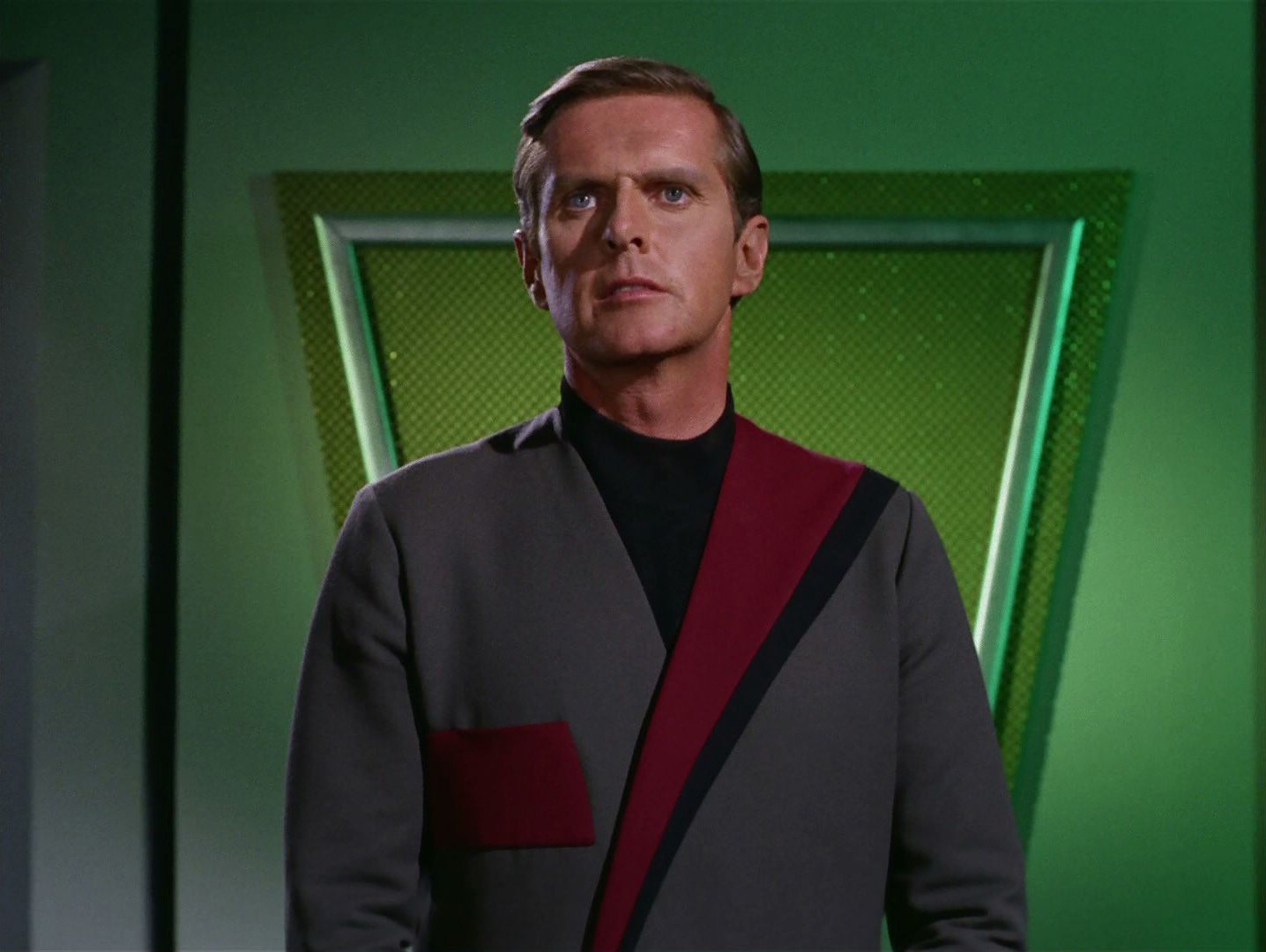 It isn’t every day you get to meet the original designer of the Starship Enterprise, the ill-fated character of “Larry Marvick,” who appears in the episode “Is There in Truth No Beauty?” – here is your chance to meet David Frankham, who performed as Marvick, at this year’s edition of Trekonderoga!

David was born in Gillingham, Kent in southeast England; after serving in World War II, he entered the world of media by first working as a news reader, interviewer and producer for the BBC. He moved to Hollywood in the mid-1950s and became an actor. He voiced the character of Sgt. Tibbs the cat in Disney’s One Hundred and One Dalmatians, as well as appearing in motion pictures such as Return of the Fly, Ten Who Dared, Master of the World, Tales of Terror, The Spiral Road, King Rat, and The Great Santini.

He was also busy on television from the 1950s to through the 1980s, appearing in such shows as Matinee Theatre, 77 Sunset Strip, Maverick, Men into Space, The Jack Benny Program, Dr. Kildare, Gomer Pyle: USMC, The Beverly Hillbillies, The Six Million Dollar Man and many more.

Star Trek fans will of course remember him as the love-struck engineer Marvick who is driven insane by the sight of the Medusan ambassador. You’ll surely find him in Engineering, tending over the warp engines of the ship he designed, when you Make the Trek! to Ticonderoga this summer!

David was born in Gillingham, Kent in southeast England; after serving in World War II, he entered the world of media by first working as a news reader, interviewer and producer for the BBC. He moved to Hollywood in the mid-1950s and became an actor. He voiced the character of Sgt. Tibbs the cat in Disney’s One Hundred and One Dalmatians, as well as appearing in motion pictures such as Return of the Fly, Ten Who Dared, Master of the World, Tales of Terror, The Spiral Road, King Rat, and The Great Santini.

Ticonderoga and the area nearby has a lot to recommend it!

Please look at the local area information heading on this website, especially at the “attractions and entertainment” and “restaurants and bars” sections.

Would you like to check out the downtown art gallery, or how about a tour of Fort Ticonderoga? The area is rich with history, especially from the French and Indian war, the Revolutionary War, and the War of 1812.

Did you know that the original USS Enterprise (which American Forces under Colonel Benedict Arnold “liberated” from the British in 1775) lies at the bottom of Lake Champlain near Fort Ticonderoga? She had a short but glorious history with the brand-new United States Navy.

Ticonderoga abounds with outdoor activities, including boating and other activities on Lake George and Lake Champlain, hiking trails to see the natural beauty of the Adirondacks, and more. Check out Ticonderoga for yourself .

Yes. We will have a table at the High School site for flyers and advertisements. You are welcome to leave your flyers, consistent with space available on the table. First come, first served for the table space.

Trekonderoga is a set tour event that embraces a wide range of sci-fi and pop culture. Although we have a focus on the nostalgic, you will see a variety of pop culture represented.

Pets are not allowed in the Trekonderoga venues. Registered working animals, e.g. for the blind or otherwise handicapped, PTSD dogs, and so on, however, are allowed as required by law.

Check our Accommodations Page (menu above) for a list of pet friendly locations.

Backpacks are not allowed at set tour, but you may use them at the High School. Be prepared to present them for inspection if asked. We do not intend to inspect anyone, but if a rare or valuable prop disappears we reserve the right to search thoroughly for it.

Cosplay costumes and hall costumes are permitted, however, cosplay and larp action on set and in all other indoor event spaces is forbidden. Cosplayers must not be noisy or disruptive. Cosplay weapons may not be drawn. Read the section on weapons below.

Sorry, there is no place for cosplayers to change on set nor is there a green room at the High School. The best place cosplayers could don the costume would be at their hotel or off premises.

Trekonderoga supports and enforces a “no touching” policy. Cosplayers are encouraged to report any unwanted behavior to security who will notify police if necessary. Anyone behaving inappropriately will be escorted off-site, and will not be permitted back in, with no refund, and will be banned from future events. Police will be called if illegal activity occurs. The Ticonderoga police, the Essex County Sheriff, and NY state Police are informed of and will respond to the event in Ticonderoga.

There are no general restrictions on videos or photographs at the high school, but we do ask that you comply with instructions as given by presenters and celebrities there.

You will certainly get a brief period at an autograph table, longer if they aren’t busy. If they are not busy, feel free to engage them in conversations, but be mindful of their schedule requirements and of others who wish to speak with them also.