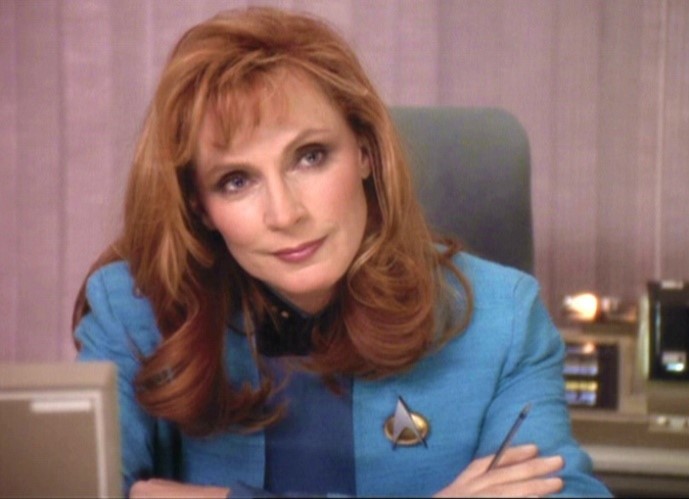 Not many Enterprise-D characters could call their Captain by his first name, but Doctor Beverly Crusher, memorably played by Gates McFadden, certainly could – and did. Representing one of the most popular incarnations of Star Trek, Gates McFadden will once again be roaming the corridors – and we expect her predecessor’s Sickbay – of the original starship Enterprise at this year’s edition of Trekonderoga!

Gates started in the movie business for Jim Henson’s organization, working on such films as Labyrinth and Dreamchild as the director of choreography and puppet movement, and as choreographer in The Muppets Take Manhattan. As an actress, she also cameoed in Muppets and played Jack Ryan’s wife in The Hunt For Red October.

But her next role as a widowed mother balancing a dangerous career with the raising of a son exploded her into the realm of Star Trek as 1987 saw her cast as Dr. Beverly Crusher on board a new Enterprise.  The long-lived newest incarnation of Star Trek gave its writers many opportunities to showcase Gates’ acting talents in such memorable Dr. Crusher episodes as “Remember Me,” “The Host,” “Descent,” and “Attached.” Her other talents were showcased behind the scenes as well, where Gates choreographed the dance sequence in “Data’s Day” and later directed her fellow castmates in “Genesis.”

Take this opportunity to personally meet the talented and radiant Gates McFadden as she makes her second appearance on board the original Starship Enterprise!